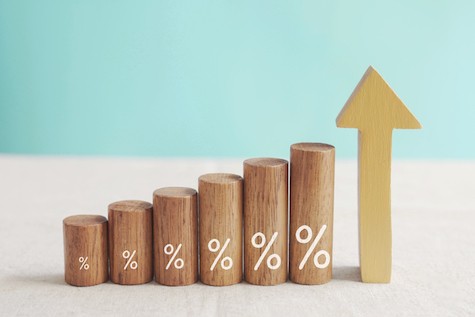 The GIC rate rises from 8 per cent in the July to September quarter to 9.31 per cent for October-December, while the SIC increases to 5.31 per cent, up from 4.00 per cent.

Meanwhile, the ATO’s SIC rate has grown from 3.07 per cent in the April to June quarter to 5.31 per cent for the October-December.

Both ATO charges are now at their highest levels since the second quarter of 2015, when the GIC rate was 9.36 per cent and the SIC rate was 5.36 per cent.

Both ATO rates are determined by a formula in the Taxation Administration Act 1953 that relies on the 90-day bank bill rate, rather than the RBA cash rate.

The GIC rate is calculated by adding seven percentage points to the average bank bill base rate for a month, specified by the act, in the preceding quarter.

For example, to determine the rise from 1 October, the ATO would have used the 90-day bank accepted bills for the preceding August.

The formula for calculating SIC is also in the act and uses the base interest rate, the 90-day bank accepted bill rate, and an uplift factor of 3 per cent.

However, the SIC rate applies when a tax return is amended and the tax liability increases resulting in a tax shortfall.

The ATO typically applies the SIC rather than the GIC when taxpayers would be unaware of the shortfall amount until they receive an amended assessment.

However, GIC applies to the original assessment of any tax shortfalls and associated SIC from their due date if the tax is unpaid.

This due date is 21 days after the ATO issues the notice of the amended assessment.